BFG provides 100 per cent. compensation to all deposits collected by a single person on accounts maintained by the banks - participants of the deposit insurance scheme up to an amount in Polish złotys equivalent to EUR 100,000. The funds collected in PKO Bank Polski - irrespective of the number of accounts on which the depositor would hold them (e.g. on a savings and checking account and a term deposit account) - will be treated as a single deposit.

In the case of joint accounts (e.g. established by a married couple), the BFG guarantee system underwrites funds of each of the joint holders up to an amount in Polish złotys equivalent to EUR 100,000.

In addition to covering funds maintained on all the depositor's personal bank accounts, the guarantee of compensation also applies to the depositor's receivables arising from other banking activities as confirmed by personal documents issued by PKO Bank Polski (e.g. of interbank settlements or of granting a bank guarantee) and amounts due on account of orders submitted in the event of the account holders' death or funeral expenditures, provided such receivables become due and payable prior to the Bank suspending its operations. The compensation guarantee also covers all and any interest due to the depositor having accrued up to the Bank bankruptcy declaration ruling date.

Currency of the guaranteed compensation payment

Disbursements of the guaranteed compensation funds are made in Polish złotys, irrespective of the currency in which the deposits collected in the Bank are denominated. For purposes of calculating the Polish złoty equivalent of euro and/or other foreign currency denominated deposits the average exchange rates published by the National Bank of Poland as at the date of pronouncement of the bank's bankruptcy will be applied.

In the case of joint accounts, being accounts maintained for more than one person, the funds being the basis for calculation of the guaranteed amounts payable to each of the joint account holders are divided equally between them.

Power of attorney to handle an account bears in no way on the guaranteed compensation amount.

In the event of pronouncement of a bank's bankruptcy, the estate trustee or executor will draw up, within 30 days of the bankruptcy pronouncement, the list of persons eligible to receive the guaranteed compensation from BFG, together with calculation of the amounts due to these persons. Compensation fund payments are typically made in the defunct bank's outlets, as per an adopted timetable and should be completed no later than within three months counting from the day on which deposited funds are not accessible, i.e. the date of suspension of the bank in its operations by the Financial Supervision Commission. Information on the time and place of such payments will be announced in the national press and the outlets of the bankrupt bank. Depositors can also apply for the guaranteed compensation amounts at a later date directly with BFG, however, with 5 years from pronouncement of bankruptcy of the concerned bank.

The guaranteed funds are paid out to persons authorised to receive them, including the depositors, their duly authorised representatives, their statutory representatives or successors in title. However, there is the obligation to suspend payment of such guaranteed funds in case criminal proceedings are instigated against the depositor (until completion of such proceedings) indicating that the funds covered by the guaranteed compensation can be involved in money laundering practices, in other words, in practices involving financial operations aimed at introducing assets of illicit origin to legal trade.

Recovery of the funds not covered by the BFG's guaranteed compensation

Depositors can also recover the funds collected on bank accounts in the part that exceeds the limit guaranteed by BFG, if available from a bank's bankruptcy estate, in the course of bankruptcy proceedings.

There are other institutions in Poland vested with the mission of lending protection to non-professional participants of the financial market, or the customers of financial institutions. As an example, Insurance Guarantee Fund (UFG), which an institution that protects the interests of insured persons.

The information on the economic and financial condition of PKO Bank Polski required pursuant to the Bank Guarantee Fund Act are available in the Investor Relations section on the Bank's website.

Detailed information on the rules of the deposit insurance scheme are to be found on the website of the Bank Guarantee Fund (www.bfg.pl). 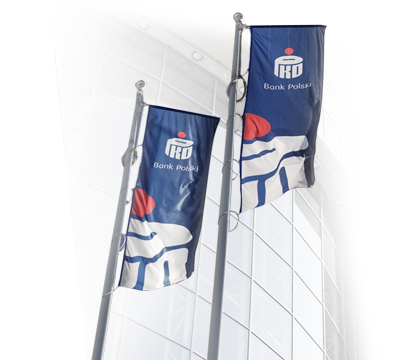