The largest Polish retail bank existing for over 90 years, PKO Bank Polski was established in 1919 under a decree of Marshal Józef Piłsudski – the Chief of State - as Pocztowa Kasa Oszczędności (Postal Savings Bank - PKO). In 1949, it was renamed as Powszechna Kasa Oszczędności (Universal Savings Bank - PKO). In 1975, it was incorporated into the structures of the National Bank of Poland (NBP). However, after 12 years it became independent again. In 2000, PKO BP was converted into a sole-shareholder Polish Treasury company. Its present name is Powszechna Kasa Oszczędności Bank Polski Spółka Akcyjna (Universal Savings Bank Polish Bank Joint-Stock Company – PKO BP SA).

The leader on the Polish banking market for many years, PKO Bank Polski offers its services to all those who would like to make a secure deposit of their savings, take out a loan for any purpose with a convenient repayment plan, or to manage their regular income using modern banking channels.

2015
2014
2013
Supervisory Board
Management Board
Strategy and development directions

The Fund Management Company’s mission is to deliver satisfaction to the Funds members with the results brought by management of their savings, and to constantly increase the service quality. In order to achieve this goal, PTE strives for continuous improvement of the Fund’s asset investment process, taking into account investment security and effectiveness and the optimum usage of the available resources. 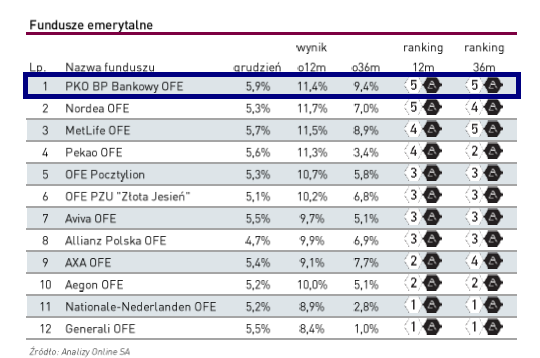 The score ‘5’ means the top position in the ranking.